Recap
Last rehearsal for the Australian teams before the Nationals

The synchro competition in Australia grows fiercely every year. With nationals at the beginning of December, the state championships give a taste of what will be seen on the national podium. Over the last two days, Queensland had their competition which saw the two synchro clubs came head to head.

Basic Novice was split into two divisions A and B, showcasing all the young talent coming into synchro. In the A grade, Ice Dazzle put out a very cute performance taking the title. In the B grade, Aquila skated a proud New York program earning 21.48 and Ice Pizzazz skated to music from “Ralph Breaks the Internet” and received second place with 16.42.

Aquila Basic Novice (Credits: Michaella Spethman - 2019)
In Advanced Novice, Phoenix skated first to “Alice Through the Looking Glass”, followed by Iceskateers with a Mary Poppins program. Both teams put out very strong performances, however, Iceskateers speed and power put them on top with 47.90 and Phoenix in second with 36.07.

Iceskateers Advanced Novice (Credits: @qsicfamily - 2019)
Tough competition was had in Mixed Age. Aurora skated their sassy ‘Nine’ program earning them a total score of 39.95. Ice Vivacity skated second to an impressive Imagine Dragons medley, they earned a total of 32.68 putting them in second place.

Aurora Mixed Age (Credits: Sam Williams - 2019)
Junior only had one competitor this year, the reigning national champions Iceskateers Elite. They impressed with their Irish dance short program and Cher Medley for their free program. Earning a total score of 89.04.

Iceskateers Elite (Credits: @iceskateerselite - 2019)
Senior is the division to watch in Queensland. The only state in the country with two Senior teams.

Ice Storm and Nova have been strong competition for one another for a number of years. Nova came out on top after the short program, their upbeat Queen ‘Don’t stop us now’ performance earned 36.21. Ice Storm followed closely with their captivating program to "Lions Inside" earning them a total of 34 points. Both teams came out fighting in the free program, Ice Storm skated first to a Queen Medley. Their impressive speed, high energy and range of tricks resulted in a total score of 107.57. Nova followed with a beautiful performance to Piano Man by Billy Joel, however, fell behind in some of the technical levels earning second place with 98.68.

Nova Senior finished second (Credits: Soraya Hammond - 2019)
In the Adult grades, Evolution took out the basic category with 28.95 points and their INXS program. Solstice was the only team in the Advanced grade, the reigning national champions performed their tragic heroine program passionately and earned 40.0.

In Victorian State, located in south-eastern Australia, the Junior Eclipse team performed (65.48 points) with also the Adult team On Edge and the Basic Novice skaters from Team Harmony.

All the teams now knuckle down in preparation for the national championships in Melbourne starting on the 30th of November. 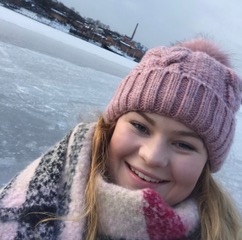