Taryn’s roller skates. Living in the UK, Taryn is a synchro skater and a correspondent for Jura Synchro in her own country.

The closure of all the ice rinks, although expected, still came as a shock. And an emotional one at that. A general anxiety took its place; about people I care about having their entire income cut, about people who have trained their whole lives to compete, who suddenly find themselves in limbo, about those whose lives revolve around the rink, those who use the ice as an escape and those who have found a passion in this icy world of ours. It’s a bit like losing a part of yourself. The obvious solution? Inline skates!

Having neither planned nor prepared for a lockdown, I found myself without any of the tools needed. No old boots to use. Certainly no wheels. So I had to buy both. But, inevitably, people had thought about this before I did. Most of the sellers had sold out and were not due to be restocked until June. Plan averted. Then came hours of searching on the internet. What types of skates can you get that would be similar to ice skating? A friend recommended a brand and a Facebook group suggested another one. Trouble was, it wasn’t easy to find somewhere that sold them. Plus, I needed to buy a new pair of boots.

Eventually, I found a shop in Italy. Even better, they had a range of boots which they sold already mounted. I entered my card details whilst trying to ignore the price tag. I also scoured Amazon for elbow and knee pads. With hindsight, a very important investment.

A week later, a shiny white pair of boots with strange wheel things were delivered to my door. It was already dark so I had to content myself by sitting on the sofa with them on. Ostensively to wear them in. The next day, I got up very early to try out my new wheels. I stood up, tottered forwards a bit, unable to lift a foot to push, started rolling down the drive and fell straight on my bottom. After reassuring the old lady who lives across the road from me that I was okay (embarrassment multiplied), I shuffled down the drive on my hands and knees until I reached the flat surface of the road.

Having skated with roller skates before with no problem, I assumed I would be able to skate straight away on my new frames. Erroneously as it turns out. These were different. These skates were higher, so I felt like I was on stilts. They only have 3 wheels, so it felt precarious. And I didn’t dare to use my rocker to turn. Then there was the boot itself. The ankle was far too high and they were new! Trying to ignore the flooding of horror that I was back to being a beginner skater, and remembering the pain of new boots, I did sensible exercises; two foot slaloms, two footed pushing, then taught myself to push using the same methods I use in Learn to Skate classes. The adjustment wasn’t easy. I certainly didn’t film myself and put videos up on social media. What I also didn’t factor in was the amount of effort it takes to push on wheels compared to on the ice. I managed about 15 minutes and then stopped.

Amazingly, the next day I felt a lot more confident. I think my brain needed time to recalibrate the differences in balance. However, every single step, every single turn had to be worked out again with a different rocker point. I couldn’t assume that I could do something just because I might find it easy on the ice. Another problem was stopping. Habit, and preference, meant that on the ice, I liked to show stop. If not that, then a hockey stop. I like the quick, sharp stops. These are NOT transferable. Concrete and wheels do not allow slip and I have been head over feet a few times because I’ve forgotten that I’m wearing wheels. My elbow pads are bendy, robust and cover most of my arm. For this I am very grateful.


One turn I hadn’t managed, was twizzles. Single twizzles were fine, even if backwards were a little scary, but more than one revolution? Impossible. Now twizzles are both my adversary and my delight on the ice. There’s no nicer feeling than a well executed twizzle. Failing twizzles, I thought I’d give a spin a go. But alas, no success there either.

Browsing YouTube videos and demonstrations showed me that both were possible on my wheels so I proceeded to get very frustrated with myself for not being able to do either. Help came in the form of Adam Jukes. Having won his category at the 2019 World Open Inline Skating Championships and also a former figure skater, I hoped he might be able to explain what I was doing wrong. Like every coach I’ve ever had, over Zoom, he took me back to basics, grimaced at my leg position, reminded me to think about all the usual things and boom, I could spin.

Apparently twizzling is best done on a flat, smooth surface where there are no stones so until I find one of those, I’ll leave them be.

Since then, I’ve discovered a car park. The surface is full of pot holes and it’s surprisingly hilly, but the space is liberating. I’ve enjoyed myself immensely, charging around the place, improving my stamina and my lines. Every small achievement feels great!

Currently, I’m teaching my friend’s daughter to roller blade as it’s the only thing which will get her out of the house. She had just started Learn to Skate when lockdown happened but I hope by the time she’s back to the ice, she’ll have mastered most of the basics and be gunning to join a synchro team. One day, we were skating in the car park and a police patrol car drove up and called us over. Expecting to be told to move on, I was surprised when he asked us if we were ice skaters. He informed us that there was another group of women in a nearby carpark doing the exact same thing. Facebook told me it was members of a local adult synchro team! It’s a small world.

Inline skating isn’t the same as on the ice, I can’t train to the same level, I can’t go out when the floor is wet and I miss the social aspect, but it’s a skill in its own right.

Whatever the ‘new normal’ becomes, and whenever I return to the ice, I’ll keep up the inline skating. There’s something magical about skating outside in the sunshine. 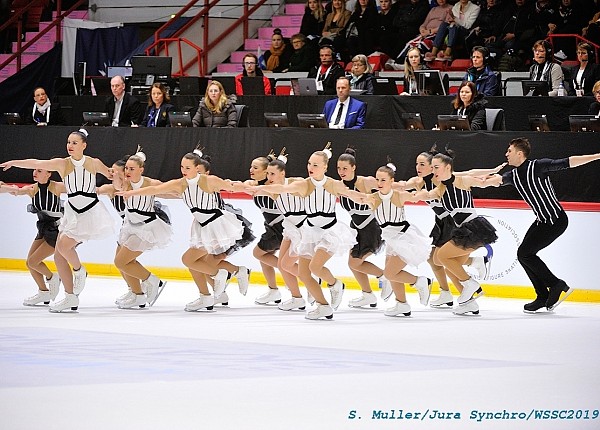