#Synchro
Virtual tryouts and trainings, the new reality of many synchro teams

Ice Fantasy, an Advanced Novice team from Finland had the chance to select their new skaters before the quarantine. (Credits: Ville Vairinen - 2020)

In these difficult times, many synchro teams around the world are waiting to be back on the ice by continuing their virtual workouts. Some teams had to select new skaters for next season without seeing them on the ice. Reactions.

"We did virtual tryouts in April and we are now on week 4 of virtual summer training," start Adrian College teams from Adrian, Michigan (USA). The Bulldogs use Facebook groups to communicate over the summer.

Each week, the skaters do something related to several sections. At first, the skating ("since we don’t have rinks right now we do things like ballet, deep stretching, learning/performing dance combos, and free leg/stroking positions on the floor"). But also mental training (goal setting, personal development, team bonding, leadership, etc), nutrition (with a dietician working as a group and individually), and strength & conditioning ("a mix of both strength coach and athlete led workouts - and we track benchmarks each week").

Other teams in the USA, but also in Europe, continue their off-ice training. As the Novices Team Sapphire (ESP) who continue to do virtual calls for their physical training and stretching.

"We do online classes two times a week, but not everyone has got the things or space we need," explain Munich Destiny from Germany. With this Basic Novice team, they are doing stretching, workouts, dance classes and team building. "Soon we will be able to do normal training in small groups and recruit new skaters," they enthuse.

Back on the ice with the whole team
In Finland, several synchro teams have been able to conduct their auditions and tryouts before the coronavirus crises. The Novice Advanced team Ice Fantasy, for example, has already selected the skaters for the upcoming season. "We are 19 at the moment but there is a chance that we will get more," explains a skater.

As many Finnish teams, Team Fantasy from Vantaa will be back on the ice this week. Finland has indeed allowed the ice rinks to reopen at the beginning of June. "We have to keep a distance to each other, wash hands frequently and if anyone is feeling even slightly sick, the skater is not allowed to come." The whole Team Fantasy won't have to wear masks.

After long weeks away from the rinks, synchro teams that have the chance to skate again will gradually get back on the ice before working on the new programs in the summer. "We're hopeful it all worked out the way it was supposed to and that we will have a great season," concludes Adrian College team. 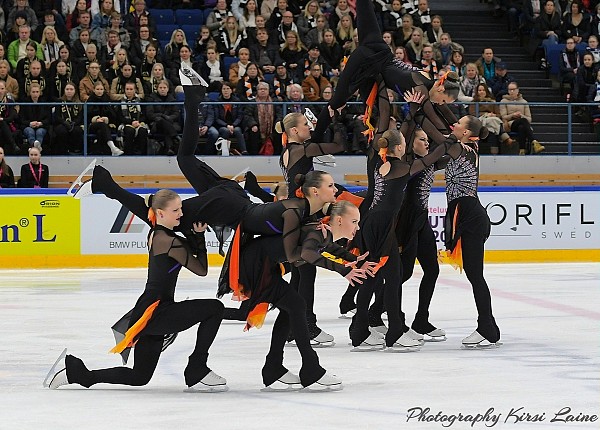